We are at the dawn of a new space age. Xenium, a special fuel with outstanding properties, was discovered on a distant planet called PK-L7 and a mining outpost established. As the base grew larger, and the miners drilled deeper, something happened. The Xenos, an alien species we believed to be peaceful, suddenly went mad and turned against us. They are infected, like zombies. Few of us remain after the onslaught, and we don’t expect any help. We are survivors, we will have revenge, and we will prevail!
Now is the time for…
Zombicide!

Zombicide: Invader is a cooperative board game for 1 to 6 players. Play as a team with your friends, as survivors of a space colony fighting the infested Xeno horde!
The Xenos are played by the game itself, using simple rules and a deck of cards. Find weapons, eliminate Xenos, and upgrade your survivors’ skills with experience. The more Xenos you kill, the more of them are coming!
Play 10 missions on 10 different maps made with the included modular map tiles, or create your own.

Zombicide: Invader is a standalone game. It is fully compatible with all expansions from the sci-fi Zombicide range. 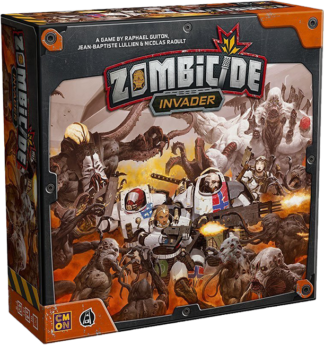