We are the Black Squad. The best color for covert ops, and to let people know they’d better forget you. We were on a wet job when emergency calls came from the planet PK-L7, the main operating platform extracting the precious Xenium fuel. The aliens there have turned infected, bloodthirsty, and an onslaught is going on. The stakes are high, and we cannot sit idle. The high command ordered us to protect the Xenium. We decided to protect the people. Perhaps some compromise can be made. Or we do both. Yes, that sounds like a challenge worthy of the Black Squad.
Ready your weapons, buddy. We’re going to war!

When Xenium was first found on PK-L7, it seemed like humanity’s dream. Now, it’s a nightmare. Thankfully, the humans have nightmares of their own to send against the marauding aliens. They’re the Black Ops squad, and they’re going to get as many survivors out of that hellhole as they can.

The Zombicide: Invader’s Black Ops expansion set lets players dive further into the heart of PK-L7 and fight against the terrible Xenos in new ways. The set includes six new Survivor figures, each with their own dashboard full of special abilities, as well as a new Bot and a new type of Sentry Gun. But they’ll have their work cut out for them, as the Juggernaut Abomination is roaming around. Playing through a new 10-mission campaign, their job is to save people and grab as much Xenium as they can.

Zombicide: Black Ops is an expansion for the Zombicide: Invader board game. It is fully compatible with all expansions from the sci-fi Zombicide range. 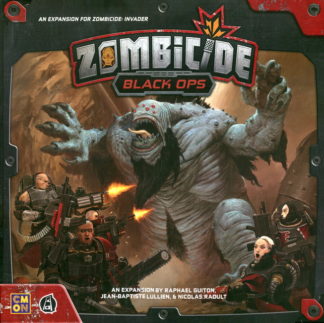