The Heroes of House Stark March South to Avenge Eddard

The rugged northlands breed hardy people who know that to survive in the harsh landscape, they must work together. As such, families have strong bonds strong as iron and even bannermen are like kin. When one of the family is wronged, it’s the entire group that retaliates. And that’s what’s happening as Robb, King in the North, looks to have revenge for the death of his father, Eddard. And he’s definitely not alone.

The Stark Heroes 3 set for the A Song of Ice and Fire: Tabletop Miniatures Game gives House Stark players a host of new characters with which they can personalize their army. The set includes Starks like Robb and Eddard, but also Stark Bannermen members such as Maege and Lyanna Marmont, Brynden Tully, and Rickard Karstark. 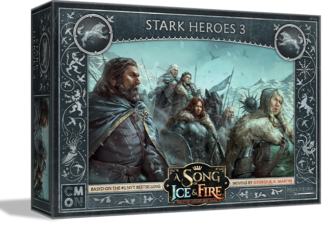