House Lannister’s Ambitions are as Deep as their Coffers

While King Joffrey might have the last name of Baratheon, it is actually the Lannisters that are in control of the Iron Throne in King’s Landing. Joffrey’s mother, Cersei, is truly the one with her hands on the strings of power and she’s got a tight grip, not willing to let go for anything. Instead, she works her magic to make her control even more firm, using her brother, Jaime, even as a hostage, as a useful tool.

The Lannister Heroes 3 set for the A Song of Ice and Fire: Tabletop Miniatures Game gives House Lannister players seven new figures they can use to personalize their army. Some work from the shadows of the NCU board like Tommen & Cersei. Others head to the battlefield, like Gregor Clegane, astride his mighty warhorse. Even Jaime, while being held captive, works to undermine the enemy from within their ranks. 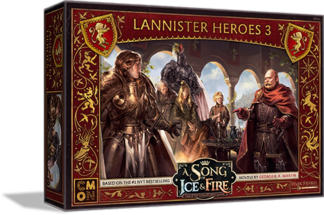