One of House Stark’s Most Loyal Bannermen Marches to War

House Stark has many faithful bannermen that gladly march to war alongside the major house. One of the most stalwart allies is House Karstark. The lesser House was originally founded as an offshoot of the major. House Karstark’s soldiers are generally kitted out with flails and shields, making them rather deadly in combat. Though, truly, their greatest weapon is the conviction of House Stark’s cause, meaning they will fight valiantly to the bitter end whenever possible.

The Karstark Loyalists box for the A Song of Ice and Fire: Tabletop Miniatures Game gives House Stark players a new melee unit to field on the tabletop. While the troops are moderately armed and armored, it’s their faith in House Stark’s cause that can see them through combat. When joined by a Loyalist Captain, their zeal reaches almost religious levels, cutting down their enemies in a flurry of attacks. 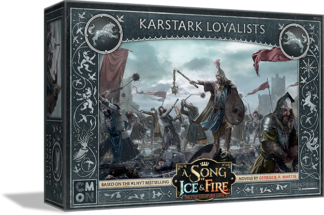