Rain Blighted Arrows Upon Your Foes

The hiss of Reanimates’ blighted arrows raining down from the skies sends even veteran soldiers scrambling for cover. Wounds inflicted by these arrows rapidly necrotize: flesh peels away, foulness spreads, and bones crumble and crack. Panic spreads as healthy warriors fall, rotted from within. Able to kill at range and afflict their targets with the blight of the Mistlands, Reanimate Archers inspire fear in even the most stalwart soldiers.

Fire poisoned arrows down on your enemies with the eight new Reanimate Archer figures included in the Reanimate Archers Unit Expansion! These eight figures give you the option to field another two-tray unit or increase the size of a larger unit—perhaps fielding a block of archers that will rain death on your foes. Like the Oathsworn Cavalry, these figures are identical to the figures included in the Runewars Core Set, and this expansion gives you an easy way to raise more undead to fight for Waiqar the Undying, while opening dark new paths with five new upgrade cards. 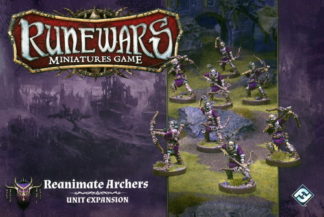