Stand Firm for the Realm!

When the fires of war threaten the land of Terrinoth, the rank-and-file of Daqan form a mighty bulwark to protect their homes, and the spearman rise to the challenge of keeping their lands safe.

The Spearmen Unit Expansion comes with eight Spearmen plastic figures and two plastic infantry movement trays to expand your Daqan army. Five additional upgrade cards for any army will give you the tools you need to push back any force.

Make the enemies of Daqan fear its might with the Spearmen Unit Expansion. 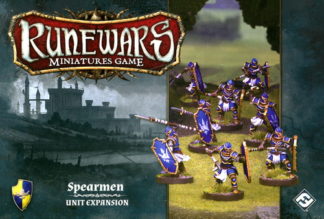