Devour All Those Who Resist

The massive Carrion Worms that follow the armies of Waiqar the undying are not easily tamed, but those that are prove to be valuable assets for the carrion worm masters on the field of battle. Carrion Worms are swift for their size and inspire fear in the heartiest of Waiqar’s enemies.

The Carrion Lancers Unit expansion features two Carrion Lancer Plastic Figures, one new and one identical to the core set, to expand your legions of the undead. The expansion also features eight new upgrade cards to improve your armies and crush your enemies underfoot. 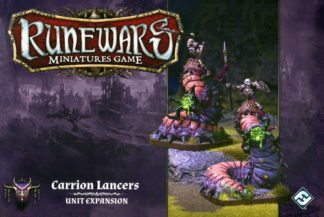