A handful of heroes have just stolen the powerful relics of the Baleful Queen. Without them, the immortal sovereign is weakened, recovering them is now her sole purpose. With the High Mages attempting to destroy them, the heroes have fallen back into the Bastion of the Ancient Kings, where they must defend the fort to the peril of their lives. Unceasingly, the hordes led by the Warlords besiege the ramparts. If this citadel falls, an entire civilization will be swept away, and an entire world will fall into chaos…

In the cooperative game Last Bastion, the players take on the roles of heroes who will have to defend the last bastion against the assault from the forces of evil.

A player’s turn is divided into 2 phases:
The Horde’s phase. The player must apply the effect of the monsters present on their monster board.
Their Hero’s phase. The player can move. They also have the choice between 2 actions:
Fight or Use the resources of the bastion by activating a Bastion Tile.
Play then proceeds this way in turnorder, until the end of the game.

If the players manage to defeat the warlords, they win the game. Otherwise, if all of the heroes are taken out, or if three of the bastion’s tiles are in the grasp of evil, or if the monster deck is empty, then the players lose the game. 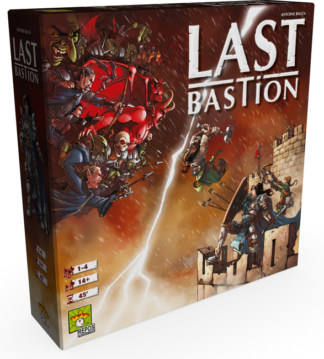