The dark is staring back at you
It is an age of space travel and discoveries. Humanity is ready to reach new frontiers thanks to Xenium, a breakthrough fuel allowing spaceships to go farther and faster. Something, however, went wrong. PK-L7, the sole extraction point for Xenium, has been invaded. The Xenos, an alien species, were infected and became zombies, attacking everyone on sight.

We are the Green Squad, a unit of elite soldiers trapped in the Xenium mines of PK-L7. The Xeno horde is coming from the deep, eager to reach the surface and destroy everything in its path. We are few but determined to stop them at any cost. It is time for…
Zombicide: Dark Side!

Zombicide: Dark Side is a cooperative game for 1 to 6 players. Play together against the game as Survivors of a subterranean alien invasion! The terrifying Xenos are played by the game itself, using simple rules and a deck of cards. Find weapons, eliminate Xenos, and upgrade your Survivor’s skills with experience. The more Xenos you kill, the more of them are coming! Play 10 missions on 10 different maps made with the included modular map tiles, or create your own missions.

Zombicide: Dark Side is a limited print run. You don’t need it to play with Zombicide’s sci-fi range, but you may enjoy the standalone experience and extra contents for your custom missions. 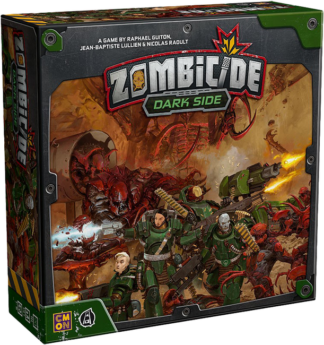