The Brotherhood is Strong While Guarding The Wall

Even further north than the lands of House Stark lays The Wall. This imposing edifice protects the relatively calm, rich, and fertile lands from the much wilder civilizations that live beyond it. Manning The Wall are the Night’s Watch. Though they may come from a myriad of origins, they are no rag-tag group, training relentlessly. These troops are willing to lay down their lives to protect everyone south of them.

The Night’s Watch Heroes 3 set for the A Song of Ice and Fire: Tabletop Miniatures Game gives Night’s Watch players a host of new figures they can use to personalize their army. Leaders like Cotter Pyke and Ser Denys Mallister train new recruits like Satin into a cohesive fighting force. Meanwhile, more veteran Brothers like Eddison Tollett and Benjen Stark will gladly do whatever is asked of them in the protection of Westeros. 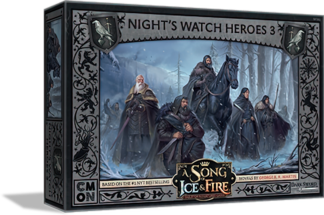