As you adventure through the Royal Wood do not allow the scenery to distract you, for in the world of Dark Souls™ death always awaits. Black Dragon Kalameet is a fierce embodiment of that fate, as dark in colour and nature as its name suggests, with the chaos gem glowing balefully between its eyes. Do you have the courage and skill to overcome the black dragon and its malevolent Mark of Calamity?

The Black Dragon Kalameet Expansion also adds new encounter cards which provide larger battles than ever before in Dark Souls™: The Board Game. The tremendous scale of these encounters creates a whole new level of peril for you and your party. Are you up to the challenge?

Not a complete game. The Black Dragon Kalameet Expansion is intended for use with Dark Souls™: The Board Game. 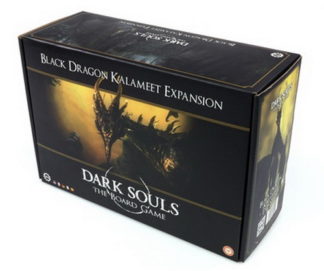