2099 NT:
While a terrifying virus is devastating the world’s population, a scientific base immersed in an oceanic abyss makes a strange discovery that could decide the future of humanity. Conduct an in-depth investigation and crack the secret of the HADAL Project.

You are a temporal agent of TIME, an organization at the service of humanity. Time travel is now a reality and you are one of the regulators. Due to recent events, TIME had to modify its operations in depth. It still uses receptacles, but time travel now exploits a technology that combines the very advanced science of the 22nd century with strange esoteric methods passed on by the mysterious Syanns.

In the T.I.M.E. Stories Revolution scenario The Hadal Project a deadly virus is killing of the world’s population in the year 2099, and a science base in an oceanic abyss has made a discovery that may alter the future of humanity. Players must conduct an investigation and discover the secrets of the Hadal Project.


The T.I.M.E. Stories Revolution line (the Blue Cycle of Time Stories) is a series of standalone scenario board games where players delve into the adventures of a temporal agents trying to fix the time stream. 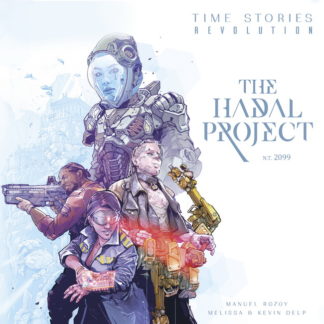