In the far off kingdom of Principalia, dark forces have displaced the royal family. One by one the royals have been waylaid until only a wee infant, the heir to the throne, remains. Now a wizard’s beloved familiars are all that stand between the life of an innocent babe and a sorcerous, would-be usurper, as an entire kingdom holds its breath in fear.

Familiar Tales is an exciting narrative game where players take the roles of a wizard’s familiars, entrusted with saving and raising a displaced princess. They must keep her safe from the evil forces that would see her dead, but when it comes to children, it is not enough to merely survive! The familiars know that every choice they make will affect the young one in their care. If they are victorious and the throne is reclaimed, what kind of woman will sit upon it?

This first printrun of Familiar Tales comes with the Forager’s Market supply tray!

App required to play!
Access the free web app at FamiliarTalesGame.com.
Experience a fully-narrated story that comes to life with professional actors! 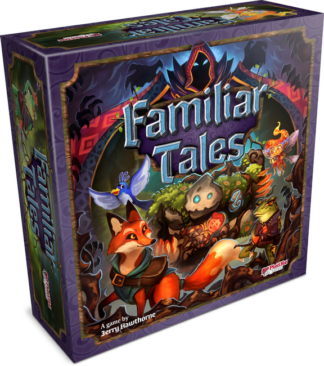