The regime of winter clutches all in its icy grip, but dangerous revolutionaries devoted to spring still resist. Alice, Dorothy, the Tin Man, and the rebels of spring fight a desperate battle against the forces of Snow White, the Mad Hatter, and the soldiers of winter. The Conflict of Autumn may be over, but there are still new tales to tell.

Winter Tales is a narrative board game of storytelling and fairy tale adventures for three to seven players, set in the grim chill of Wintertown. Players control the lives of their favorite fairy tale characters as they seek to complete quests, creating a new fable. In the course of the tale, players tell the story of soldiers battling in the streets and plazas, and rebels laying cunning traps.
Can Spring return, or will Winter reign eternally?
Craft a new story in Winter Tales! 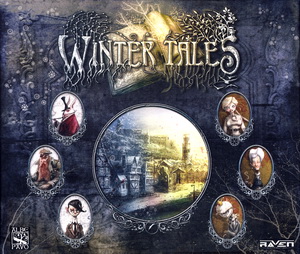