Promises of power and domination have lured the primitive Troglodytes to the Darkness. Their knowledge of extended cave systems has proven invaluable to host their new allies, and their bloodseeker minotaurs are living assault machines. The strong and tough Troglodytes have sworn allegiance to evil and will crush anyone opposing them!

Not all humans are looking to fight against the Darkness. Some have been tempted by its promises of power and have taken up arms with it. That’s the case with the Troglodytes. They have extensive knowledge of the cave systems under the surface, and their Bloodseeker Minotaurs are almost impossible to escape from. The Massive Darkness: Enemy Box: Troglodytes adds 22 new enemy figures that can be added to games of Massive Darkness.
Troglodytes are tough opponents, making good use of Shadow Mode to gain bonuses to defense. Players have to make sure to hit hard if they want to take these guys out of the fight. This set contains Troglodyte Warriors, Brutes, an Agent, and a Bloodseeker Minotaur.

Not a complete game, a Massive Darkness Core Game is needed to play with this expansion.
(Although these miniatures may also be used in any fantasy or roleplaying game!) 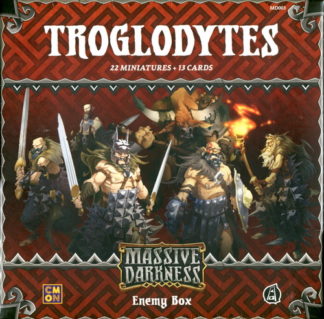