The Greatest Show on Golarion

When the ringmaster of the Circus of Wayward Wonders is found murdered moments before the troupe’s debut, daring circus performers must scramble to arrange a successful show and find the killer. A trail of clues thrusts these heroes into a web of simmering hatred and scheming fiends and a far-reaching plot to eradicate life across the Starstone Isles!

The Show Must Go On is a Pathfinder Second Edition adventure for four 1st-level characters. This adventure begins the Extinction Curse Adventure Path, a six-part, monthly campaign in which the heroes lead a traveling circus as they unravel a plot to eradicate all life from the Starstone Isles at the heart of the Inner Sea. The adventure also includes advice on how to run a traveling circus, new circus-themed rules, and a menagerie of monsters both wondrous and wicked. 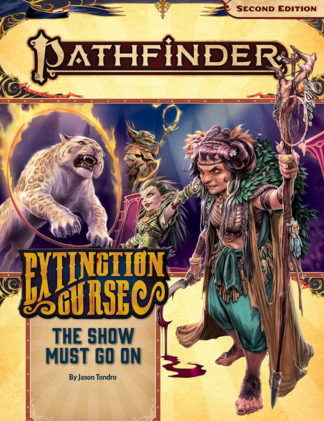