The Last Giant Expansion (Dark Souls the Board Game expansion)

Beneath the Forest of Fallen Giants, you will come face-to-face with the last remaining of his kind. The Last Giant is a truly massive foe with virtually impenetrable flesh festooned with the swords of his would-be conquerors. Face him with caution and deep respect for his iron will and power, as both yet remain within him. Will your strength and preparation be sufficient to grant this weary foe his final rest?

He is the last remaining of his kind, left brutally maimed, with the swords of the fallen spitefully embedded in his stony flesh. Imprisoned and left to rot beneath a forest filled with the corpses of his brethren, he prepares for his final breath— yet the willful and strong soul of his kind denies him rest. Do not think him weak or mistake the pitiful creature for an easy opponent, for he is neither.
This Dark Souls: The Board Game expansion features a terrifying new mega boss in the form of the Last Giant. Included are a new gigantic mega boss tile, deadly new boss behaviours, new boss treasures, and a unique heat up mechanic in which the giant rips off his own left arm to use as a massive bludgeon!

The The Last Giant Expansion also adds new encounter cards which provide larger battles than ever before in Dark Souls™: The Board Game. The tremendous scale of these encounters creates a whole new level of peril for you and your party. Are you up to the challenge?

Not a complete game. This The Last Giant Expansion is intended for use with Dark Souls™: The Board Game. 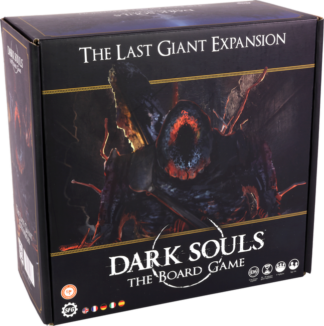