Become a temporal agent in a narrative decksploration game.

1982 NT:
We are at the beginning of the 80’s and there are ghosts from the past that can’t find rest. Unveil the dark secrets of the Californian showbiz industry.

Estrella Drive is the sixth expansion for the narrative board game T.I.M.E Stories and is about show business in Hollywood, California. The T.I.M.E Stories series continues with this brand new scenario, lavishly illustrated as usual. Features a drastic change in the game: pressure on the players is not only about time, it involves moral choices, a powerful opponent and new mechanisms.
This scenario is recommended for Mature Audience Only.

Not a standalone game. You must own the T.I.M.E. Stories Base Game to play this scenario. 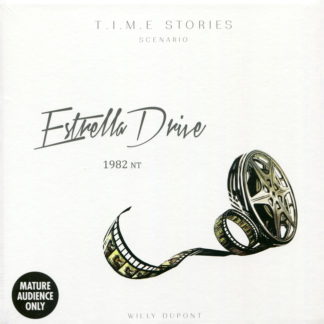