In Sector 6, the newcomers to the decaying stellar prison of Obliti, have to run-through the intricate labyrinth of galleries in Sector 6 of the prison. It’s here where the distribution of oxygen takes place and they’ll have to be the fastest in collecting the most if they want to survive until tomorrow. Only the cleverest players will be able to manipulate the mechanical labyrinth to their benefit to collect all the possible oxygen.

Sector 6 is a strategy board game comprised of an original adjustable hex tile system that will make each game totally unique and surprising.Players must move through a labyrinth of moving walls and pick up oxygen points to become the winner.
Games have two different phases:
Build Phase: with a set of simple rules the contenders will build the labyrinth. This is a crucial phase, since players will decide where to place the oxygen and their own Entry points where they will start moving from.
Competition Phase: contenders move into the labyrinth to pick up the oxygen points. Also, they may rotate tiles to either open or close galleries. It’s necessary to calculate the movements on each turn thoughtfully to avoid getting trapped. 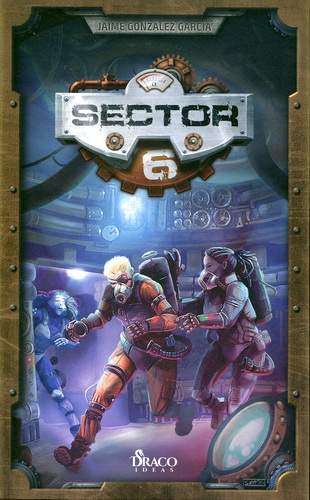