Gloomhaven: Jaws of the Lion

You are a member of Jaws of the Lion, one of the most infamous mercenary groups in this run-down backwater. When a sisnster cabal starts disappearing the less fortunate of the city, it somehow falls to you to get to the bottom of it… so long as you get paid for your trouble.

The game also includes 16 monster types (including seven new standard monsters and three new bosses) and a new campaign with 25 scenarios that invites the heroes to investigate a case of mysterious disappearances within the city. Is it the work of Vermlings, or is something far more sinister going on?

Gloomhaven: Jaws of the Lion is aimed at a more casual audience to get people into the gameplay more quickly. All of the hard-to-organize cardboard map tiles have been removed, and instead players will play on the scenario book itself, which features new artwork unique to each scenario. The last barrier to entry — i.e., learning the game — has also been lowered through a simplified rule set and a five-scenario tutorial that will ease new players into the experience.


Gloomhaven: Jaws of the Lion can be played as a stand-alone game or as an expansion to Gloomhaven. 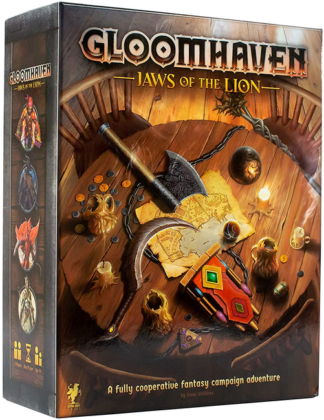 Je bekijkt nu: Gloomhaven: Jaws of the Lion €53,50
In winkelmand