Gloomhaven is a cooperative game of epic adventure, pitting a group of mercenaries against all manner of automated monsters in scenarios across a far-reaching and ever-evolving campaign world. Players will buy equipment, level-up, and eventually retire in this expansive game of tactic combat with Euro-insired card play.

Players will take on the role of a wandering mercenary with their own special set of skills and their own reasons for traveling to this remote corner of the world. Players must work together out of necessity to clear out menacing dungeons and forgotten ruins. In the process they will enhance their abilities with experience and loot, discover new locations to explore and plunder, and expand an ever-branching story fueled by the decisions they make. This is a persistent game that is intended to be played over many game sessions. After a scenario, players will make decisions on what to do, which will determine how the story continues, kind of like a “Choose Your Own Adventure” book.
Playing through a scenario is a cooperative affair where players will fight against automated monsters using an innovative card system to determine the order of play and what a player does on their turn.

This is the second printing of the game. The rule book and scenario book were updated, along with many of the cards and other components, not only for cosmetic reasons, but to also change the balance of the game in some instances. It is not a new edition, though. None of the artwork changed, there was only one minor change to the core rules (that monsters couldn’t have more than 10 curse cards in their deck), and the only significant component change was the addition of HP/XP dials to replace the wooden trackers on the player mats. 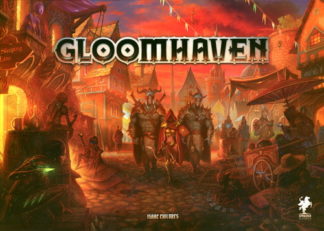