This box contains a full set of the models from the basic game that have been re-mastered and produced in high detail resin so that you can customize your own ships and give them your unique paint schemes.

The Firefly-class ship is a multipurpose, mid-bulk transport boat designed by Allied Spacecraft Corporation. From when the first series one hit the market in Feb 2435 to the latest series four model in July 2513, they represent one of the most versatile and readily available ship types in the verse.

The Tohoku-class cruiser was conceived as a mobile base for pacification operations, and a visible symbol of Alliance power and prestige. In essence, each Tohoku is a self-contained city in space, providing a platform for the Alliance to bring the benefits of civilization to the backward worlds of the Rim.

Reaver starships are abominations: older-line models for the most part often no longer used by other inhabitants of the ‘verse. They are festooned with bits of random debris and ghoulish junk, a characteristic paint scheme of red slashes, and the skeletons of their prey, and are frequently armed with a magnetic grappler with which to seize victim ships.

Not a stand-alone game! This expansion requires Firefly: The Game to play.
Miniatures sold unpainted and require assembly. 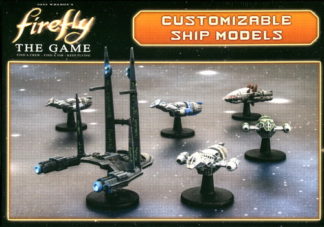