Set Sail for the Stars!

This Limited Edition variant of Spelljammer: Adventures in Space has alternative art covers with a distinctive design and soft-touch finish.

Spelljammer: Adventures in Space presents the Astral Plane as a Dungeons & Dragons campaign setting unlike any other. Home of the stars and gateway to the heavens, the Astral Plane teems with excitement and possibility. With the help of magic, spelljammers can cross the oceans of Wildspace, ply the silvery void known as the Astral Sea, and hop between worlds of the D&D multiverse.

This set contains everything a Dungeon Master needs to run adventures and campaigns set in the starlit realms of Wildspace and the Astral Sea, as well as new options for players who want to create characters at home in this fantastic setting. 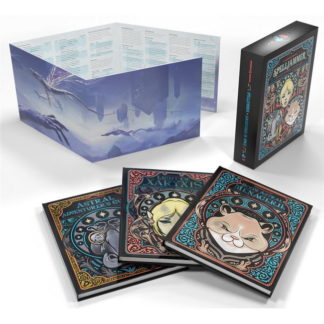