Embark on thrilling new Imperial Assault missions with one of the galaxy’s most formidable bounty hunters: Boba Fett! With this deadly bounty hunter at your side, you can bring Boba Fett’s fearless inventiveness and vicious skills to every mission – assuming you can afford to hire him.

Like other Villain Packs, the Boba Fett Villain Pack offers essential new cards and missions for both the campaign and skirmish games, alongside a detailed plastic figure required for fielding Boba Fett in Imperial Assault tournaments. For the skirmish game, this expansion offers new Command cards that open powerful new strategies and a new skirmish map with two unique missions. The Imperial player in a campaign game also gains access to a new side mission and a three-card Agenda set to hunt the heroes throughout the campaign. 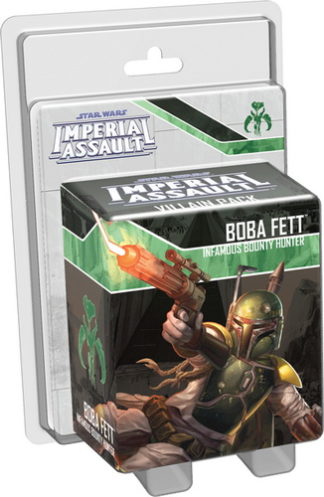