For decades, Orcs and men used to cross the borders to fight each other for food, vengeance, or just for fun. Over time, both groups got used to it: anyone born in this rainy region grew to be a natural-born fighter. Then, the zombie plague came across the land, sweeping aside armies, townsfolk, and the borders itself.

We, the survivors, are looking for answers to the necromancer threat. Would you come with us deep in the Orcish territories, facing the horrendous tainted zombies in a savage land? Are you up to the challenge of an unprecedented Zombicide?

The Zombicide: Green Horde Friends and Foes expansion brings a lot of new material to games of Black Plague. It contains four new Survivors, plus their ID cards and new equipment. Tagging along are six new Familiars, who can be acquired throughout the game. Their help will be needed to take on the new Tainted Walkers and the hulking Tainted Abomination. There’s also a new 10-scenario adventure pack that utilizes five new double-sided terrain tiles. The fight for survival is just beginning.

All components are fully compatible with the medieval fantasy Zombicide range of products. 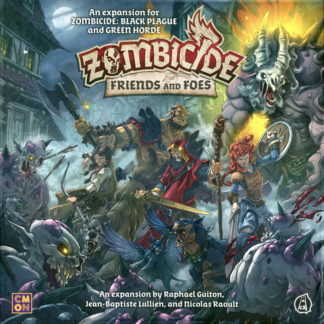