Welcome to the dark times! In a mad quest for forbidden knowledge and ultimate power, the necromancers have unleashed the apocalypse upon the living. Zombies have destroyed the King’s armies, and now roam the land, spreading chaos and death.
Is it the end? Are we cursed to die, huddled in our homes?
It’s a dark time, but not for those with a will.
Draw your sword, span your crossbow, and ready your spells! For the few, the brave, it’s time for… ZOMBICIDE – BLACK PLAGUE!

Zombicide: Black Plague is a standalone cooperative boardgame for 1 to 6 players that brings the relentless zombie-killing action of Zombicide into a brand new fantasy setting!
Players control a party of survivors as they fight to rid the land of an invasion of zombies controlled by the game itself. Survivors find weapons, learn spells, battle zombies, and gain experience. The more experienced they get, the more powerful they become, but the more zombies rise to face them!

Zombicide: Black Plague is much more than just the classic Zombicide game you know and love, transported into a fantasy world. While it retains the general Zombicide mechanics, several changes and additions were made for this new iteration.

Black Plague brings a whole new breed of survivors to Zombicide hailing from all walks of medieval life, and even including some fantasy races like dwarves and elves! Each of these heroes posses their own unique abilities to face the zombie horde, from familiar skills to all-new ones. 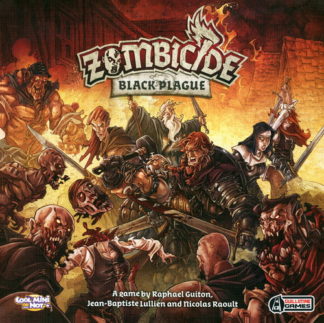