Under the Shadow of the Dragon

A terrible Dragon has been terrorizing your homeland for quite some time. Who will be able to confront this creature of eternity? Courage alone will not be enough to win this battle. Ancient scrolls hold the secret of how to make a mighty magic weapon. It is not until you have equipped yourself with such a special artifact that you may take up your quest of bringing the creature’s reign of terror to an end.

Are you ready to take on this task?

You gather experience, treasure, and artifacts on 9 different region maps. In doing so, you will encounter creatures you have to fight, such as the Yeti of the Lionbear. You will meet helpful creatures, such as the Unicorn of the Juggler. Your journey will lead you into the City of Mages, up to the Gate to the Underworld, and atop White Mountain. But time is short! For your enemy, the Terrible Dragon, may well strike at any time to thwart your plans!

The players need to find one of 3 scrolls to create a magic weapon – the only means of defeating the monster!

The challenges of the game are decided by strategy and a bit of luck with the dice. Under the Shadow of the Dragon is a complete and easy to learn game for 2 people that offers endless game combinations. However it may also be used as an expansion set for a 5th and a 6th player to enjoy Return of the Heroes. 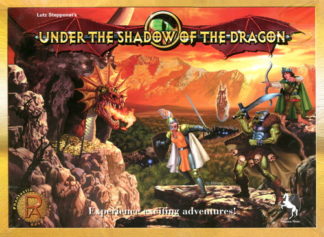 Je bekijkt nu: Under the Shadow of the Dragon €39,95
In winkelmand