The Lord of the Rings: The Card Game Revised Core Set

Adventure and Peril in Middle-earth for 1-4 players

Yet it is not our part to master all the tides of the world, but to do what is in us for the succour of those years wherein we are set, uprooting the evil in the fields that we know, so that those who live after may have clean earth to till. What weather they have is not ours to rule.
-Gandalf, The Return of the King

Sometimes, in order to truly appreciate a tale, one must first go back to its beginning. Grand adventures and strong fellowships are important and wonderful, but the first step of any journey is just as important as the last. With that in mind, it’s time to return to the beginning of one of the most epic adventures of all…

With increased contents and some quality-of-life improvements, this new version of the classic LCG’s core set is the perfect opportunity for a new player to dive into the game. The box comes with everything you may need to kick off your adventures, including enough cards and components for four-player games right out of the gate. There is a reason why The Lord of the Rings: The Card Game has been a fan favorite for over ten years!

In The Lord of the Rings: The Card Game, players assemble a band of adventurers who are attempting to complete dangerous quests in Middle-earth. from the bright fields of the Shire and the dangerous paths of Mirkwood Forest to the mighty kingdoms of Gondor and Rohan, the heroes of this beloved setting join together to resist the threat of the Dark Lord, Sauron. 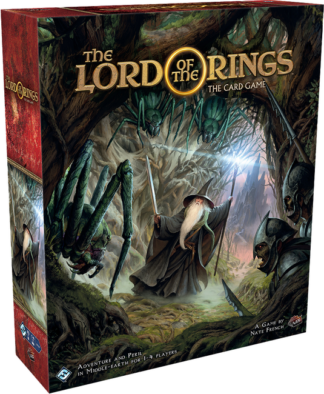