Both the Dothraki Horse Lords and the famous Unsullied owe their allegiance to the Mother of Dragons, Daenerys Targaryen. Their officers and veterans lead her troops to victory time and time again across the world with a combination of skill, charisma, and iron discipline. While leaders of these disparate groups possess vastly different styles of command, the results are much the same. Their troops fight harder, move faster, and survive long enough to see the next battle. Above all, their dedication to the Dragon Queen is absolute, and their faith in her cause is unshakable.

The Targaryen Heroes I set for the A Song of Ice and Fire: Tabletop Miniatures Game gives House Targaryen players a wealth of new options for customizing their force. The box contains many new unique characters, each with their own special abilities to bring the Iron Throne back under Targaryen rule. The set includes new options for army Commander, as well as Attachments and NCUs. Everything needed to use them is included. Stat cards, Tactics cards, and a new special Tactics Zone are all right inside the box. 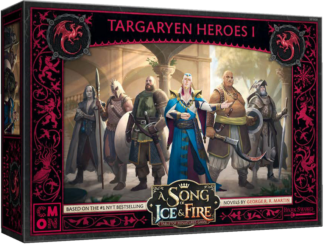