The Classic Fantasy Adventure Board Game

Enter a mythic world of dragons and sorcery!

In Talisman you’ll embark on a perilous quest for the ultimate treasure, the legendary Crown of Command. You’ll choose the warrior, priest, wizard, or one of eleven other heroes with powers both magical and mighty.

But the path to the crown is treacherous. Legends say that only a fabled Talisman can safeguard you in the lands past the Portal of Power. Yet, finding such an artifact is no small feat: monsters, traps, and evil magic wait to defeat you at every turn.

So summon your courage! You will need it to best your opponents, to secure the crown, and to seize your destiny!

Talisman is an adventure board game set in a high fantasy medieval world. Players have 14 characters to choose from -all based on role playing archetypes- such as heroes, wizards, villains, thieves, monsters, etc. The game makes players feel they are traveling the world to find equipment, weapons, ancient relics, and companions that will help them on their quest to acquire the Crown of Command. Along the way they visit various locales in the worlds, battle each other and fantastic creatures to make their way to the top. 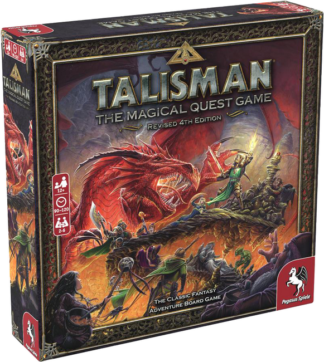