Those who forged the Crown have returned!

Great treasure and great peril arise from the burning depths. The Ifrit have risen from their underground kingdom to consume all the land in flaming death. They will not stop until every field is burned to ash and every surface dweller is clapped in chains of brass and taken down to the flaming caverns below.

New perils await you and your fellow players in The Firelands, a new expansion for Talisman Revised 4th Edition. The Ifrit – legendary beings, once enslaved to create the Crown of Command – have returned to exact vengeance upon the land of Talisman. Even as you quest to seize the Crown of Command, the Ifrit wage war against you and your fellow players, burning precious cards away and setting the land itself ablaze in a furious inferno. Can you escape their flames and triumph over the Ifrit? Only the greatest of heroes will rise above the fire and defeat the newest threat to the land.

Will you be able to extinguish their flame?

Not a complete game. Talisman Revised 4th Edition is required to play with The Firelands. 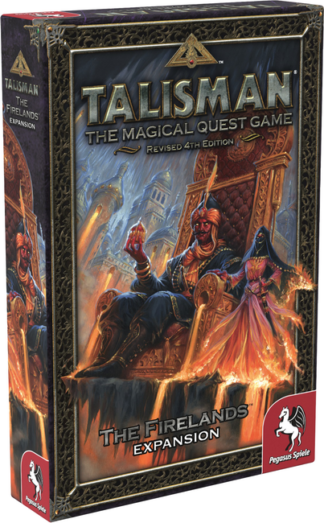