A heavily armed bomber that could double as an escort or reconnaissance vessel, the Rebellion’s K-Wing was frequently flown on strafing runs against planetary targets and slow-moving capital ships. In X-Wing the K-wing’s surprising acceleration, heavy armor plating, and devastating ordnance make it an outstanding ship for hit-and-run operations. Its four shields and five hull make it one of the game’s most durable small-base fighters, and it pairs this durability with a primary turret weapon that boasts an attack value of “2.” On top of this, the ship comes with the new SLAM action, which allows it to race across the battlefield and deploy its bombs at an unprecedented speed.
In addition to its pre-painted K-wing miniature, sculpted at 1/270 scale, the K-Wing Expansion Pack comes with four ship cards and nine upgrades that dramatically improve the efficiency of your ordnance.

This is not a complete game experience. A copy of the X-Wing Miniatures Game Core Set is required to play. 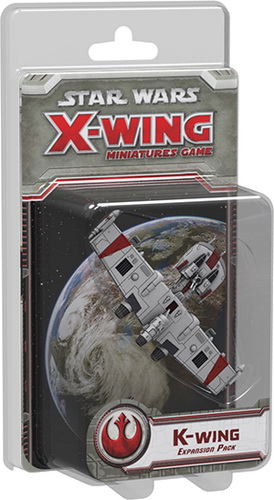