Whether spearheading surprise attacks on key Republic facilities or pirate raids on innocent worlds, the Trident-class assault ship heralds the arrival of hostile forces, emerging ominously from the seas of stars. Armed with crushing tentacles and capable of operating in space, atmosphere, or the ocean’s depths, these versatile warships present an unorthodox threat that can strike unexpectedly to seize control of nearly any battlefield.
Inside you will find multiple new Huge Ship Upgrade cards, Quick Build cards, and several new scenarios for using this craft: Rising Tide, a head-to-head scenario, and Leviathan Hunt, a co-operative scenario where multiple players work together to bring down a single Trident-class assault ship controlled by a simplified Solo System AI deck. This pack includes everything you need to add 1 Trident-class Assault Ship to your game. 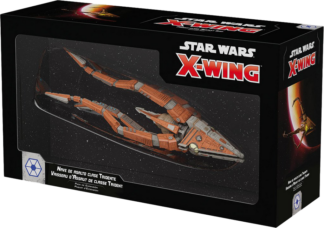