The First Order’s starfighter engineers continue to develop new technologies for use by their ace pilots, and the Fury of the First Order Squadron Pack allows players to bring these advanced starfighters to their games of Star Wars™: X-Wing!
The TIE/se Bomber bristles with a heavy payload of ordnance, while the TIE/wi Whisper Modified Interceptor is a deadly craft worthy of the Supreme Leader himself. Armed with its stealth capabilities, advanced maneuverability, and heavy weapon turret, Kylo Ren leads his fanatical 709th Legion as they mercilessly hunt pockets of resistance across the galaxy.

This squadron pack includes content for Kylo Ren and his devoted diehards, featuring new abilities and upgrades based on their appearance in Star Wars™: The Rise of Skywalker and Star Wars™: Resistance. This pack includes everything you need to add 1 TIE/wi Whisper Modified Interceptor ship and 2 TIE/se Bomber ships to your games of Star Wars: X-Wing! 14 Pilot cards create a pool of versatile pilots for these ships which can be customized in a myriad of ways with the 32 included upgrade cards. Players eager to play with these ships as soon as possible can utilize the four included Quick Build cards which will get these powerful ships on the table in record time with effective suggestions on upgrades and configurations. 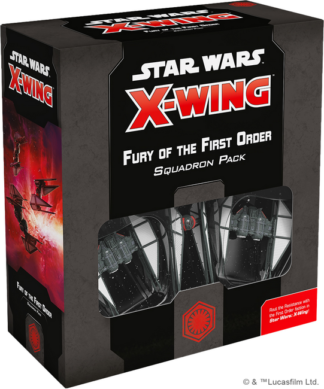