Women of dubious virtue have been murdered in the Whitechapel district, and the authorities are on edge.
The mysterious killer has been dubbed Jack the Ripper by the newspapers.
Will you unmask him before Sherlock Holmes does?

Just like in previous adventures in Sherlock Holmes Consulting Detective, each case in this 10-case collection casts you as one of the Baker Street Irregulars and sets you in Victorian London to help Holmes solve these confounding mysteries. As in the previous cases, the introduction is provided for you, and then you and your team of detectives have the freedom to go wherever you want to track down the answers and solve the puzzles, making the most of the tools and clues provided.

The Jack the Ripper & West End Adventures standalone box offers four cases, involving Jack the Ripper, playable as a full story. The other 6 cases are classic cases, reworked specifically for the new Sherlock Holmes Consulting Detective range, and brings the players to the West End district of London.

Do you have the deductive reasoning and cunning smarts to crack these cases? 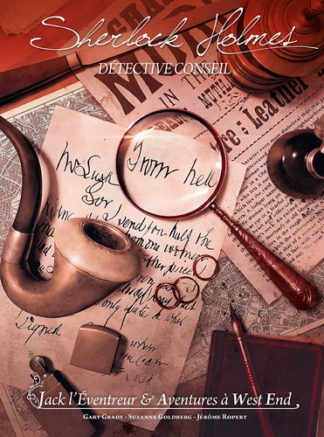