The fog creeping its way through the streets of London envelopes you in mist. The streets are lined with gas lit lamps, highlighting the various shops and other establishments. Victorian London is known for its greatness, but within the dark streets, devious acts of crime are committed far too often. Outcries from the beautiful Queen’s Park can be heard, warning all that are within earshot that something is perpetually amiss. Whispers in dark taverns mention the mysterious Carlton House Mansion—the crimes that have been committed inside are both unspeakable and incredibly difficult to solve. However, even the most difficult cases to crack are only but a mere game for the world’s greatest detective: Sherlock Holmes.

Just like in previous adventures in Sherlock Holmes Consulting Detective, each case in this 10-case collection casts you as one of the Baker Street Irregulars and sets you in Victorian London to help Holmes solve these confounding mysteries. As the previous cases, the introduction is provided for you, and then you and your team of detectives have the freedom to go wherever you want to track down the answers and solve the puzzles, making the most of the tools and clues provided.
However, what makes the Carlton House & Queen’s Park collection different is that it provides players with two new locations to explore. One of these is both the grounds of and Carlton House itself, the daunting mansion full of secrets locked away inside. Queen’s Park is the second, inside which lies one of the hardest cases you’ll face yet—one that will take three days to solve!

The Carlton House & Queen’s Park standalone box includes ten individual case booklets, some of which are the longest cases in the series to date! Of course included within the box are all of the tools you’ll need to solve the cases, including maps, newspapers, and even other resources to aid you in your journey through the streets of London and to the new locations provided!

Carlton House & Queen’s Park will prove to be your toughest challenge yet. Do you have the deductive reasoning and cunning smarts to crack these cases? 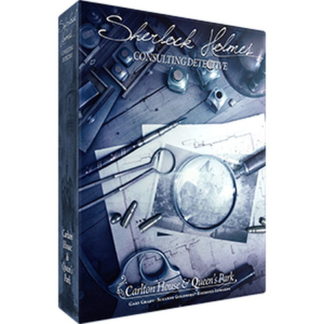