Energy bolts from Tametomo’s astral bow reduced two enemy fighters to twisted scrap, sending them spiralling into the ancient asteroid carved into the shape of a turtle. Inside the mech’s cockpit, the pilot grinned. Without support, Hanzo would be unable to hold the temple, giving Pulsar Clan yet another victory. But when Tametomo took aim and fired at the last remaining fighter, the energy bolts from the bow refracted. Cursing under his breath, Tametomo’s pilot checked the settings on the astral bow before firing again. And again the bolts refracted like they were nothing.
“Not possible!” he hissed, but it was too late. Hanzo and the indestructible fighter were upon him. The temple was lost and the day belonged to Gamma Clan.

Shattered Alliances is an explosive expansion for Starship Samurai, bringing more variety and methods for inflicting humiliating defeat upon your friends! Two new, beautifully sculpted mechs bring new abilities to humble your enemies and combo with your other forces. A whopping forty new action cards will shake up your games with a level of variety that will leave every player guessing at their opponents’ next moves. Many of these new action cards are clan-specific, bestowing even bigger, bolder effects on players allied with the right clans. 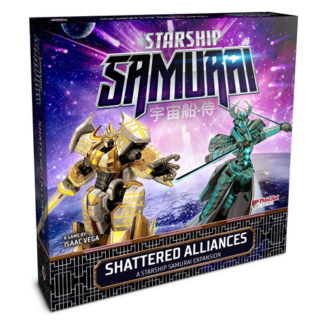