Once normal rats living in the hills and mines near Brimstone, these rodents have become mutated by the perverse effects of the Dark Stone radiation! Building their nests out of wood scraps, rags, and the magical black rock, the Scourge Rats have transformed into horrific beasts, growing massive in size, and sprouting long fangs, spikes, and even extra tails! Once little more than a nuisance, the rats of Brimstone have become a deadly threat, breeding out of control and spreading across the countryside like a plague! 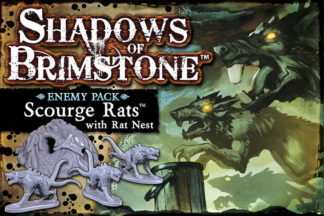