A Game of Gods, Armies, and Struggles of Power

The Dark Pharaoh has fallen, and the land of Hekumet has fallen into chaos. All along the Great River, from the upper delta to the lower cataract, the Great Houses are struggling against each other for control of the realm. In the end, only one House will rule supreme over all of Hekumet. Will it be yours?

Reiner Knizia’s Scarab Lords is a complete, stand-alone card game for two players in which each player controls one of two Great Houses vying for control of Hekumet. As the ruler of your Great House, you must use your minions, strongholds, and the favor of the gods to achieve military, economic, and religious victory.

Scarab Lords includes one deck for each Great House and a special extra deck. You and your opponent exchange cards in your decks for those in the extra deck, thus modifying your decks and ensuring that no two games ever play the same! 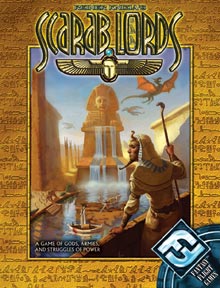