Deep within the ancient fortresses of Terrinoth stand ancient stone guardians, ever vigilant. Only awakened by Lords and Wizards who know the secrets that can imbue the golems with life when the need is dire. The strength and ferocity of these golems knows no equal, scything their massive blades through infantry and cavalry with ease. Rune Golems will stop at nothing to destroy the enemies of the Daqan, and then return to their hidden slumber until called upon again. 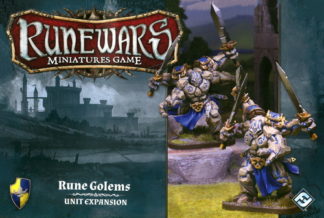