Lead From the Front!

As a young man, Lord Hawthorne’s home of Seragart was beset by a horde of barbarians led by a mysterious warlord wielding foul sorcery. As a descendent of Sir Rodric the Strong, Hawthorne was not one to sit idly by. Though badly outnumbered, Hawthorne charged out of the gates with the city’s remaining troops, taking the barbarians by surprise, in the process uncovering the malicious power behind the attacks: the renegade sorcerer Ankaur Maro. Though the defenders of the city were eventually able to break the siege, Maro was able to escape.

Hawthorne was knighted for his bravery in the defense of Seragart, and vowed to never again let a foe escape his blade. Now, rumors swirl that Ankaur Maro has made his return as a servant of Waiqar, and Lord Hawthorne rides forward, determined to defeat his old foe once and for all.

The Lord Hawthorne Hero Expansion includes two different figures for Lord Hawthorne to add to your Daqan army, a cavalry version and an infantry version, as well as six new upgrade cards, four of which will improve any army and two that are exclusive to Lord Hawthorne.

Lead the Daqan forces to glorious victory with the Lord Hawthorne Hero Expansion! 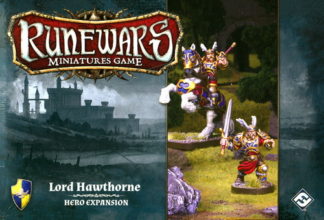