Stalk the Foes of the Latari!

None exemplify the primal, wild nature of the Verdelam more than the Leonx Riders. Charging into battle riding their ferocious Leonx, large felines native to the Aymhelin, these Elven warriors pierce through enemy lines with the force of a storm, only to use their lightning speed to evade counter-blows and change their angle of attack with the swiftness of a gale. 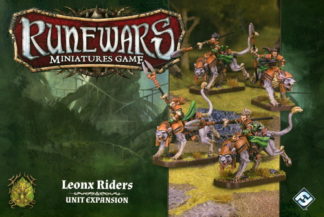