Rise of the Necromancers

Are you evil….Maybe just a little?

Then unleash your most wretched forces, seize the throne and become the Necromancer King!

Rise of the Necromancers, is an evil strategy game for 2-5 players, where the players each control a Necromancer struggling for absolute dominance.
To reach the vilest of goals, you will have to master dark magic, explore festering dungeons and raise an army of undead minions.
There are four different undead minions with different powers: Zombies, Hell Knights, Ghosts and Skeletal Dragons. You also have to choose an Apprentice who can aid you on your quest and you may have to sacrifice him for the greater evil along the way.

Each player moves their necromancer miniature around the game board to gather resources, corpses, spells, items, enter dungeons, battle cities and fight rival necromancers.
If you gather the right combination of evil you may become Academy Headmaster of one of four academies: Decay, Blood, Mist or Bone which will be a big step on your path to dominance.

Throughout the game, necromancers can increase their combat powers and movement abilities as they amass their armies, learn spells and craft evil items.
The game has varying starting setups, so no two games are ever the same. 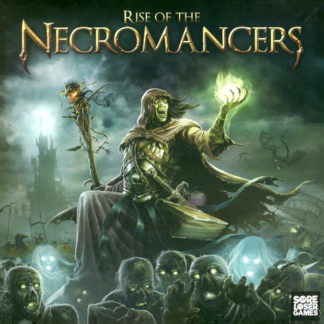 Je bekijkt nu: Rise of the Necromancers €78,95
In winkelmand