The Rebels’ base on Hoth has been discovered by the Empire! As Imperial walkers descend to the surface and the last transports flee, a few heroes of the Rebellion step forward to protect a colony of refugees. Little do they know that their heroic actions will eventually lead them back to the very place from which they fled: Hoth!

Return to Hoth is a new expansion for Imperial Assault, offering plenty of new content for the campaign and skirmish games. A new full-length campaign allows the Rebel heroes to take up a new story in the aftermath of the Battle of Hoth, while new rules for four-player skirmish games invite you to play a massive, multi-fronted battle. With thirty-seven double-sided terrain tiles depicting the icy wastes of Hoth, sixteen sculpted plastic figures to swell your forces, and a host of cards for both campaigns and skirmishes, Return to Hoth changes your games of Imperial Assault forever! 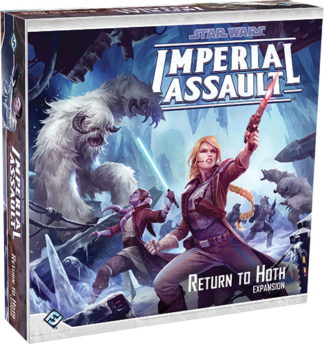