Masters of the Realm

Brave, cunning, and adaptable, humanity dominates the countries of the Inner Sea. Discover the legendary history and secret ambitions of humankind, the most populous race of the Pathfinder campaign setting. With the potential to do anything they set their minds to, humans have become unrivaled heroes, infamous villains, and even deities—and now the course of humanity’s future is in your hands. Learn of the varied and distinctive ethnicities of humankind, from rugged Ulfen vikings and scheming Chelish diplomats to noble Garundi travelers and mysterious Tian merchants, and master the unique skills and traditions they use to face the dangers of a world that refuses to be tamed.

Humans of Golarion presents a player-friendly overview of the fantastical human cultures of the Pathfinder campaign setting, along with new rules and information to help players customize characters in both flavor and mechanics.

This Pathfinder Player Companion is set in the Pathfinder campaign setting and works best with the Pathfinder Roleplaying Game or the 3.5 version of the world’s oldest fantasy roleplaying game, but can easily be incorporated into any fantasy world. 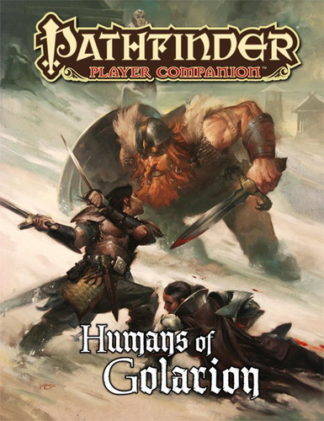