Kick open the Door! Fight the Monsters! Grab the Loot!

Who Will Become the Most Famous Munchkin Dungeoneer?

Deep in their subterranean lairs, Monsters wander the halls, guarding their treasures. Why not kick open some doors, fight with them, and take that loot for yourself? That seems like a pretty good plan. In the end, all that fighting and looting is bound to gain you some notoriety. But who will be most-famous?

In Munchkin Dungeon, players take on the role of Heroes, each with their own unique special abilities, who are bound and determined to get some new gear via slaying Monsters. They will head down into the depths of the Dungeon board, fighting everything they meet along the way. When they get to the final chamber and reach the Boss, it will be a showdown for the ages. In the end, the Hero who collects the most Fame is the winner. 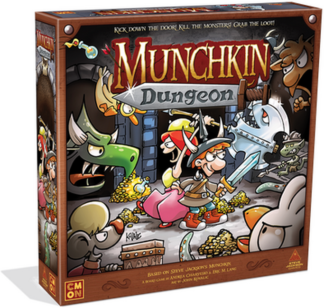