Mists of Bilehall (Descent, Journeys in the Dark expansion)

An Ancient Curse Taints Your Soul…

When the lords of Bilehall swore fealty to Waiqar the Undying, it is said that he took their oaths at sunset, standing upon a mountain that bordered the two regions. The traitorous lords became something vile that night, neither living nor dead. As the darkness cleared and the lords descended, the hamlet and farms of their domains were gone, another swath of land swallowed by the corrupting mists of Waiqar.

Venture into the Mistlands of Terrinoth in Mists of Bilehall, a new expansion for Descent: Journeys in the Dark!
A full, one-act campaign is included in this expansion, chronicling the heroes’ adventures and the dark deeds perpetrated in this misty realm. What’s more, no new heroes or hero classes are included in this Descent expansion: instead, Mists of Bilehall has been configured to enhance the power of the overlord. To that end, your army swells with twelve sculpted plastic figures – six reanimates, three broodwalkers, and three bone horrors. The very ground may give way beneath the heroes with the introduction of old walls and crumbling terrain, while the evil of Bilehall influences the heroes through the introduction of tainted cards. Even the doughtiest heroes will be hard-pressed to survive in this land of mist and half-truths. Enter Waiqar’s domain in Mists of Bilehall! 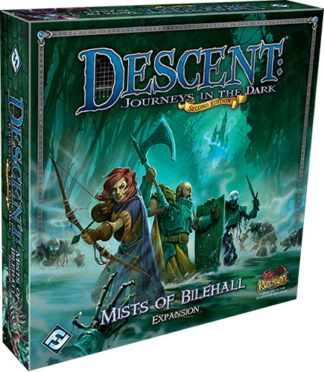