Massive Darkness is a cooperative game of Dungeon Crawling for 1 to 6 players, Ages 14 and up.

A new war is about to begin!

In Massive Darkness, you’ll join forces with the other players to enter the underground lair of the Darkness. You’ll work together, jumping from shadow to light, engaging the enemy when the moment is right. The minions of the Darkness can be anything from orcs, to goblin warriors, to giant spiders. You’ll never know what creatures await you around every corner. Play the quests in order to follow the storyline, or create your own legends using the tokens and modular board tiles. The Lightbringers won this war once before. Now it’s your turn to add your names to the history books!

Throughout the game, players encounter different monsters, including Minions, Agents, Roaming Monsters, and Bosses. An unique mechanism of the game is the Guardian. Any of the monster types have a chance of spawning as a Guardian, meaning it will use a random piece of equipment in the fight against Heroes. However, if players are able to overcome this difficult encounter, they will acquire that piece of loot! 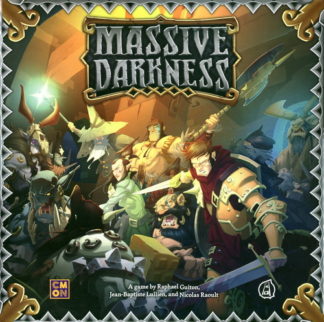