Below the streets of Arcadia a battle is raging over an ancient site!

The Guild Heroes of Arcadia finished their training long ago, and it’s beneath their status to enter the Dungeons of Masmorra, at least under normal circumstances. However, when facing a threat like Malaphyas, they’re willing to break that rule.

The Arcadia Crossover Kit allows players to use their existing Arcadia Quest Heroes from the two core games and their expansions in Masmorra: Dungeons of Arcadia. That means that 28 Heroes from Arcadia Quest, Inferno, Beyond the Grave, and Pets can be added to the campaign. Each character gets their own Hero board and two Hero cards, making them completely compatible.


Not a complete game. Requires a Masmorra: Dungeons of Arcadia core box to play. 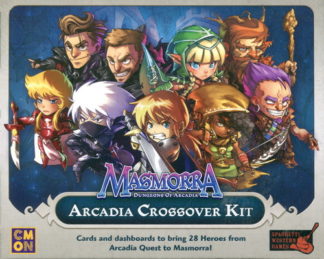